I know. I’ve been slipping. I slipped.

My goal was to write this blog semi-regularly and even though I haven’t had the time, I didn’t. Coincidentally, this seems like the perfect time to start up again.

New Year’s is not just a time to—pardon the pun—renew, but it’s also a holiday. Much of the memorable moments I’ve had since my last post have revolved around holidays.

Take Thanksgiving. As I’ve mentioned, I studied in Nice two years ago, so this wasn’t my first Thanksgiving away from my family. That, combined with the fact that it’s not a holiday in France made me less longing for home.

I celebrated with the other English assistant in Evreux and some of her colleagues. There was cornbread, I made mac and cheese, and we even had turkey. I have never seen so much variant of pumpkin in my life though. Some kind of baked pumpkin, pumpkin soup, pumpkin pie… While most of it was good, it was quite overwhelming. After consuming an outstanding amount of dinner, dessert and beer, teaching the next day wasn’t ideal.

Then there was Christmas. While the Thanksgiving experience was fun and delicious, it felt so alien. Spending such an intimate holiday with almost-strangers meant I missed out on the coziness of being in a room full of people who you understand and who understand you fundamentally. I am fortunate enough to have a relatively drama-free family, so such holidays are a source of warmth for me. I had been contemplating spending Christmas traveling on my own, as I’ve done before, and the dinner only solidified the decision for me. So I set off for Luxembourg and Belgium. 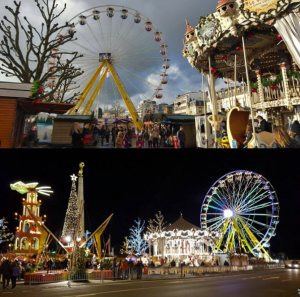 The first part of my Christmas break was spent in Luxembourg. I knew nothing about the capital city, Luxembourg City, before going there, but what I discovered was an extreme landscape with history built into it. Being able to so easily stand somewhere and look out onto large parts of the city was a moving experience every time I did it.

Christmas itself was spent in Bruges, a relatively small town where I thought I could pass the day itself quietly. Not at all.

Bruges, as I found out, is known as a Christmas destination. So when I went out on the 25th, restaurants were open, most of the Christmas market was up and running, and tourists roamed the streets. But that, and the cold and the rain, did not make the city any less beautiful in its medieval magnificence. And as I found out, that day was calm compared to the packed streets of the post-Christmas days.

While I had prepared for Christmas, I left New Year’s completely open. I didn’t want to make a big deal out of it, or get dragged into expensive travel plans. Especially since thesmall-country tour was the priority. I ended up in Paris. 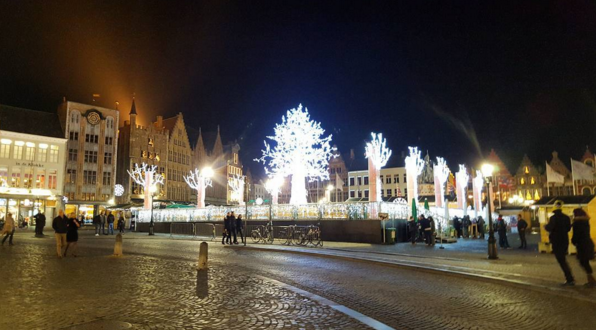 Skating rink in one section of the Christmas Market in Bruges, Belgium

Having rung in 2014 in Paris, I didn’t expect much from the city. But then again, last time, I had been on my own and had just hung out in an Irish bar. This time, I was meeting up with people, and the decision was made to check out the primetime countdown on the Champs-Elysees.

Making my way to the designated spot meant not just reveling in the lights and the people in the city, but also the aftermath of the November 13 attacks. Police trucks lined the streets and men in bulletproof vests carrying various types of guns they could barely hold made their way about the crowd. The Champs-Elysees itself was checkpointed twice over. Coming in from the Place de la Concorde, we were bottlenecked through temporary metal gates for our bags to be searched and coats to be opened. Some people (of certain skin tones) were further patted down, and there seemed to be a bag-size limit. A few blocks later, I hit another checkpoint.

There were no fireworks, but on the Arc de Triomphe, there was a projection during the five-minute countdown to midnight. Shown were well-known sites in France, but more so it seemed to be a showcase of the French people. People of almost all races and ages were shown smiling, seemingly enjoying being French. While I was cold and hungry, being among that crowd was something I’ll never forget.

Nor will I forget the general drunken revelry, though I’ve lost count of how many people publically vomited, the loud calls and songs of various groups, and how many alcohols I smelled in places that did not serve alcohol. Like the train. It was a rare experience, I knew, to be in such a large city at a time where everyone was celebrating, everyone was happy. It was humanity at its giddy liveliest, if not at its best.